Hi, my name is Samantha G., I am in eighth grade and I have played volleyball, basketball, and softball for the past three years. In volleyball, we play a game called dead fish. The objective of the game is to serve the volleyball over the net. In sixth grade, I really struggled to serve the ball. Ms. Applebaum and Ms. Pando dedicated so much time to help me, but I just could not do it. This led my small sixth-grade self to tears, many times.

However, these past nine seasons have changed who I am in many ways.  I could not have gone from hitting the net to acing the ball by myself. It took a lot of help from the coaches. The coaches are what make the Bernard Zell Athletics program thrive as it does. Each coach has not only the intention of making each student-athlete a better athlete, but also a better person. I have learned so many different things from all of my different coaches. The coaches embody the traits that we hope to develop as student-athletes. They are good leaders, compassionate, keep positive mindsets, but most of all they put us and our learning first.

Another core trait that our coaches demonstrate is tough love. Tough love is very important because it prepares you and helps you develop a thicker skin. Having tough skin is one of the biggest takeaways I have from the Bernard Zell Athletics program. I remember there was one seventh grade basketball game where I was not playing my best. I was fouling like crazy, and not being a good team player. I stomped off the court upset and pouted the whole way home. If a similar experience were to happen now, I am confident that due to my Bernard Zell Athletics career, I would still be upset about playing a game like this, but I would not stomp off the court and spoil the game for my team.

Another way that the BZ athletic career has made me a better person is through my leadership skills. Now, this may come as a surprise to exactly none of you, but since I was in SK, I have always liked to lead everything and be the boss of everyone and everything. While most sixth graders are scared of the older eighth graders, I was just jealous that they got to have all the power, and I did not. However, while I was in sixth and seventh grade, I saw the eighth graders use their power to help the younger kids learn and become better team players. My sixth-grade self would have looked at leadership as a power; my eighth-grade self looks at the leadership as a responsibility. The Bernard Zell Athletics program has helped me figure out what type of leader I am, and helped me learn how to become a good leader. The program gives you a chance to be put into a leadership role. However, you also get to observe the different styles of leadership that student-athletes and coaches use, so when it is your turn to be the leader you are prepared. Some traits of leaders that I have observed are staying positive, being compassionate, and delegating. I have tried to embody these traits during Softball this year. As a person who has played softball since I was in second grade, I have more experience on the field than most. However, I think this year I started being more positive if we win a game. Also, I have grown because now I am able to let others take a leadership role. I don’t save it all for myself.

Not only does this program grow you as a person, but it also helps you become a better team player. Bernard Zell Athletics means so much to me and is one of the best things the school has to offer. Amongst all of this, it gives me a chance to be with teammates, strengthens relationships, and it gives me a place for my peers to see a different version of myself. During school, there are a variety of pressures, and people mostly only see the academic version of you. For me, it is so special that my peers have a chance to see me in a non- academic way. This is a time that I really value having with my peers because I want everyone to know multiple versions of me not just my inside the classroom version.  Lastly, the four things that everyone regardless of your age should take away from the Bernard Zell Athletics program are winning is a lot but not everything, being a team player is key, with leadership comes responsibility, and relationships with teammates and coaches are so important.

Three years later, we are playing dead fish again, but I am now an eighth grader and it is my last game of dead fish ever. I can serve it over the net with no problem now. However, when this practice ends; I start to cry. Not because I was frustrated with my ability, but because I was not ready for the season to be over. I was not ready for my Bernard Zell Volleyball Athletics career to be over. Here I still am, not ready to say goodbye to my Bernard Zell Athletics career.

Candace Chesler and Taty Sampson for running the scorers table with such precision and organization. The system they created to hand out all 124 medals is something to marvel at.

Beth Sanzenbacher for helping to organize the finish line and all the timers - a very challenging and demanding task - and the MVP of the entire event, JACK, for being our official runner

Denise Schwartz for stocking, organizing, and selling concessions throughout the meet.

Jonah Gross, for being our Long Jump Pit official.

Our amazing assistant coaches, Kate Magnuson, Jonah Gross, and Alex Lezama, who were not only instrumental in running today’s meet, but for their work every day with our student-athletes, preparing them since early April for this event.

And last but not least, our Head Coach Benje Casper, who has the most important job of the event... the announcer and lane organizer - this event cannot run without Benje’s organization and passion... and for his overall leadership in taking over our track program three years ago, transforming this into a team that over forty students participate on!! 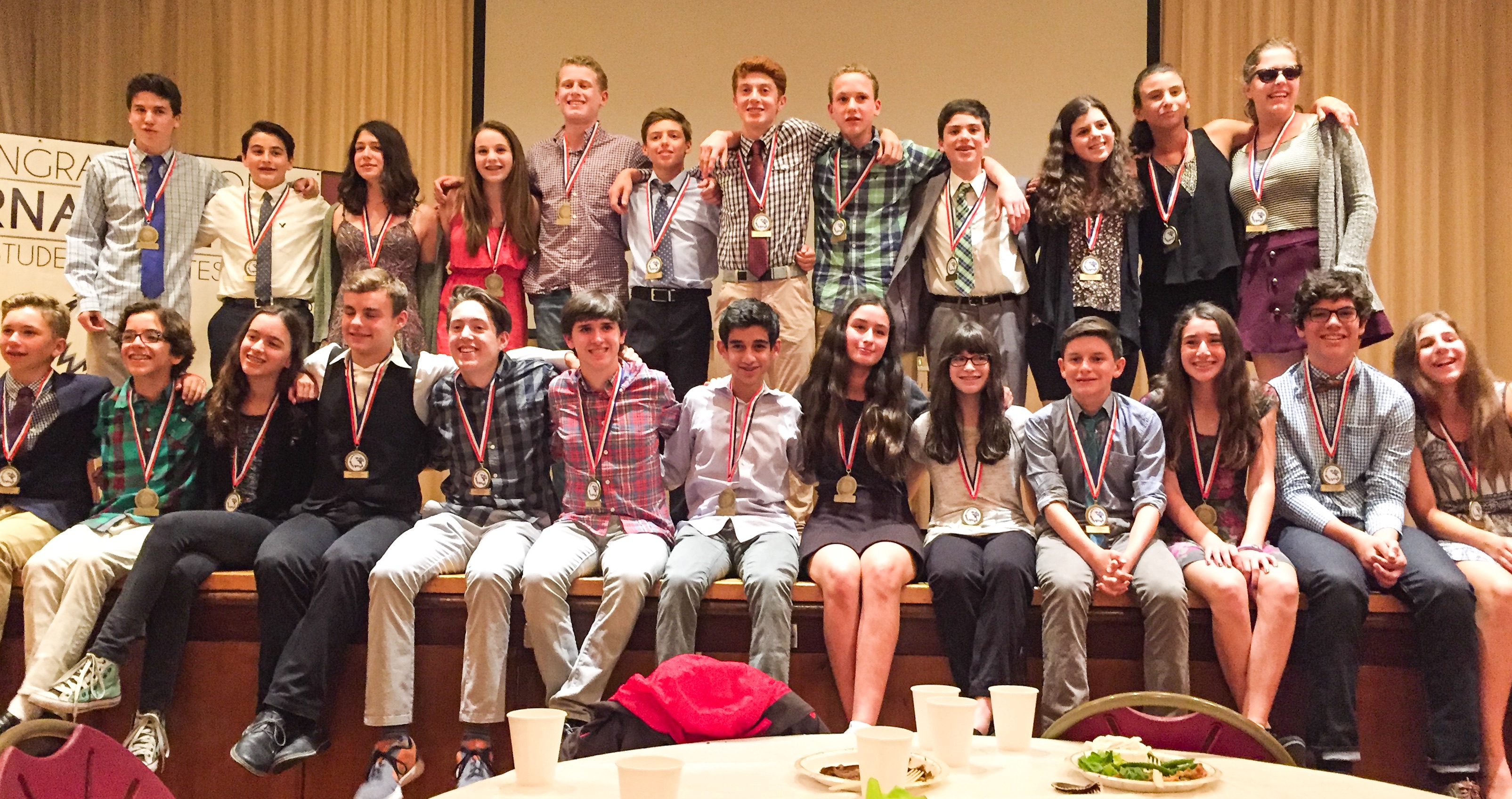 One of my favorite parts about sports is the unpredictable nature of the games. In spring 2016, I participated in arguably the most important athletic event in my three years of athletics at Bernard Zell--the varsity volleyball championship game. I had been waiting for three years to win this game. We won the first set, but lost the next. In the third set, we were two points away from victory, but lost the next five points to lose 15-13. For the second year in a row, we had lost 15-13 in the third set of the varsity championship volleyball game. Man, was I mad. The entire team had worked so hard for this and we had blown our shot. I felt an enormous amount of disappointment at that moment and during the following days. But, it wasn’t until a few days after this game that I realized that this was meant to be. Losing this game just helped put into perspective the successes, and the failures of my three years participating in Bernard Zell athletics.

I began my Bernard Zell athletic career in the fall of 2013 playing on the 6th-grade soccer team. I had no clue what to expect. I had never played competitive soccer and did not know where or if I would fit in on the team, but I thought that I would enjoy playing. It turns out that I found my place on the team and would go on to find my place and love every minute of participating on another eight Bernard Zell sports teams. I especially found a love in playing volleyball. I had never touched a volleyball before I stepped onto the court in the spring of 2014. My coaches worked with me until I had learned all of the skills necessary to become a very good volleyball player. Playing basketball did not come easy for me. Honestly, it was not my favorite sport to play. Each season, after every first practice, I would complain and say that this was not for me. But through persistence and lots of hard work each year, I would realize that playing basketball was for me. During my 7th-grade season, I went from a benchwarmer at the beginning of the season, to a starter by the conference tournament.

What Bernard Zell Athletics Mean to Me
Andie Berman, Class of 2016
Jun 8 2016
The whistle blows. I look around me to the other team members who give me a weird stare and I try not to laugh. I look at the scoreboard; it’s 0-0. The game is about to start. Ball thrown in the air, I jump, and look at my coach in the middle of the student-teacher basketball game. That moment I felt something. I felt one of my milestones passing by. This was the moment I was waiting for my whole Bernard Zell student life. For athletics, we wait. We wait till the spring of 5th grade to join our first athletic team, track. We run up and down the field. We sign up for activities. Then summer goes by and we finally have the choice of three more sports the following year, each a new and different experience than the last. Then 7th grade comes and you do the same sports again and you become even better. Then 8th grade arrives and you start to think that everything is your last and you feel it. Your last volleyball game, your last basketball game, your last moments as a team.

Every game, every practice, every last moment has meant something to me. Bernard Zell Athletics has shaped me, and helped me understand what it meant to be a part of a team. What this program has done for me is priceless. The way I have grown, how I have matured, and learned to doubt myself less.